The smoke has settled in. It's thick in the air, it blankets the bushes in the backyard, it filters the sun with an ever-present haze. This is (unfortunately) nothing new in our neck of the woods. It happens nearly every summer. Fires start, the smoke billows, and eventually finds its way up the central valley of California and makes itself at home.

In 2018, during the Carr Fire, the smoke was personal. It was my neighbors' homes burning. It was microscopic pieces of Whiskeytown National Park falling like morbid glitter from the sky. It was the green of our foothills going up in smoke right before our eyes.

In 1999, the Jones Valley fire was personal as it destroyed my parent's home in Palo Cedro. Twenty years ago, this fire that destroyed 100 homes seemed like a voracious monster.  Little did we know that the fire season described as the "one of the worst in state history" would be dwarfed by the likes of the Carr and Camp Fires.

After the lightening storm last week, I watched and waited for the fires to start. We all knew it was coming. Dry season, high temperatures, lightening. It's a bad combination. And the fires did start. Hundreds of them, up and down California. Thankfully, nothing close enough to home to cause major concern, so I went about my business and counted my blessings. Fire is such an ever-present companion during the summer months that I found myself numb to the worry and concern of others, hundreds of miles away. I've dealt with my fair share of fire trauma. Now it's someone else's turn. And I just didn't have it in me to walk that path of worry with them, whoever they might be.

When you read an article or see photos of a faraway place that is on fire, it's easy to sip your coffee and scroll on to the next news item. But when the smoke from that fire settles into your backyard it's tough to ignore. Suddenly the sky is eerie, the air quality is visibly unhealthy, and you're watching tiny bits of ash rain down from the sky. You can't open your windows, and you can't enjoy outdoor activities. Eyes get irritated, throats get scratchy. All you can do is wait, watch, and wonder.

Somehow the presence of this thick smoke pulled me from my numb abyss and forced me to reengage in my tumultuous relationship with fire. Over the weekend I forced myself to actually look at the news to see who/what/where was on fire. The map looks like the entire state is ablaze. I found myself pausing to stare at the top of my garbage can, coated with ash, and wondering about those tiny burned bits. Where did this ash come from? Was it someone's home in Vacaville? An ancient redwood tree from the Santa Cruz mountains? A winery in Sonoma County? How far did it travel? What is the story of this stuff that has burned?

It turns out that although the flames aren't currently threatening my home, this fire is, once again, personal. Flames are quickly bearing down on the city of Santa Cruz, where I lived for 5 years in my early 20's. UC Santa Cruz, where I worked for a number of those years, is evacuated with a freshly minted fire line scraped around the campus in a humble attempt to corral the flames into submission. Mt. Cross, the summer camp that I went to as a kid and worked at after college graduation, is silent, evacuated, and waiting. This isn't an anonymous blip on the map. This is the community where I lived out the carefree days of being 20-something. Mt. Cross is the place where I really encountered Jesus as a kid, and where I found friendships as a young adult that continue to this day.

My mind has a hard time imagining the Santa Cruz mountains on fire. This is the home of fog, redwood trees and lush greenery. I remember summers at Mt. Cross when it didn't usually feel warm enough to swim in the pool (although we did it daily as kids...because kids don't care). During the off-season as a camp staffer, we (even the Minnesotans) would describe the winter weather as "bone chilling cold", not because it was below zero, but because it was dark and damp. The trees soar so tall in Felton that sunset came at least an hour early as the redwoods cast their giant shadows across the camp.

I don't know how this fire story will end. The flames are still advancing, and the weather doesn't seem to be helping. If I have learned anything about fire over the years, it is that we are nearly powerless to contain it. Once a fire gets hungry enough (particularly in terrain that's tough to access), it takes on a life of its own. After you've witnessed a fire storm massive enough to generate its own weather system and fire tornado...you learn to just get out of the way and wait. And watch. And pray.

And so I do just that. I drink my coffee each morning, out of a mug that has somehow managed to survive more than half my life. (Which really is a feat, considering I have moved at least 7 times since it's been in my possession)  The watching feels personal, yet again.  I wait to hear news of this place on the map that shaped my faith as a kid and forged it as a young adult....feeling a bit weary, but still firmly rooted in the hopeful promises of a loving God. 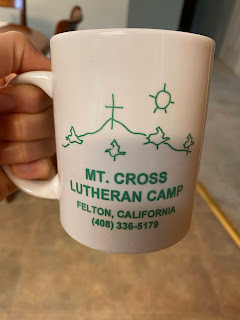 Be still before the Lord and wait patiently for Him.

Posted by Amy Cavalleri at 9:23 PM No comments:

YES! Send some joy to my inbox. Enter email here.